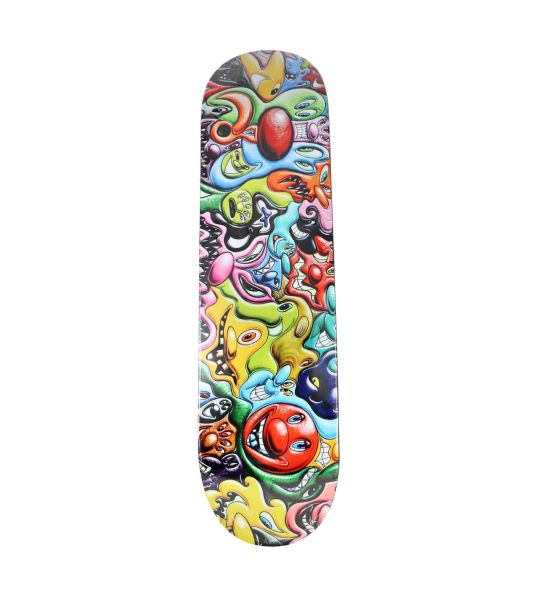 If you’ve ever explored the streets of New York City, you may well have rounded a corner to be met by an unmistakable hit of Kenny Scharf magic. His audacious, brightly colored murals have long decorated the city’s streets, first appearing in the late 1970s, and remaining an ongoing presence. And, although Scharf keeps one foot firmly planted in his street art roots, the artist’s creative flow certainly knows no bounds. Venturing not only into a wide variety of media – including sculpture, performance, painting, collage, and large-scale installation – but also a breadth of energetic collaborative projects, Scharf’s presence in the art world is a positive force that never ceases to stir hearty embrace, rather than reckoning!

A Colorful Journey From West To East, And Back Again

Born in Los Angeles in 1958, Kenny Scharf grew up within a world saturated with feast-worthy visuals. The contemporary culture that surrounded him was to be absorbed in such a way that would later influence his own creative outpouring. His appetite ranged from comic books art to street art, and the pop-culture icons to be found within his television set. He basked in pop art, surrealism, and abstract expressionism. Not to mention, of course, the Lowbrow art movement of Los Angeles, which was in its heyday – and with which Scharf would always be associated. However, it was Scharf’s move to New York City, to study at the School of Visual Arts, that exposed him to the bubbling street art movement that the city had on the boil – adding the final inputs to Scharf’s infamous style. He was to graduate in 1980, and become a critical character within the East Village art scene of the following decade.

Here, Scharf honed his unique visual methodology, and quickly scaled the cresting wave of the city’s renowned artistic era, alongside contemporaries such as Andy Warhol, Keith Haring, and Jean-Michel Basquiat. In fact, Scharf and Haring shared a Times Square apartment – both living and breathing prodigious creativity, and immersion in the thrumming party culture of the day.  As the talents within this new artistic sphere began to blur the lines between street art and fine art, Scharf’s work began to draw high-caliber attention – first at the 1985 Whitney Biennal, before expanding into national and international audiences. Scharf has discussed his experience of the loss of his friends as the decade came to a close, as each was snatched so quickly from a world that they had filled so profusely with art. For Scharf, however, this period was to be his genesis, as his prolific output continues on – once more, from his West Coast base in Los Angeles.

Welcomed Within A Friendly Hallucination

Scharf describes his work as pop-surrealism, and aptly so. Each vibrant composition feels super-charged as – most frequently – colorful anthropomorphic blobs, animals, or aliens, peer out at the viewer. Highly decorative and often tessellating colorscapes are populated by Scharf’s cartoonish characters, or, on occasion, personalities from the cartoons of his youth, such as The Flintstones or The Jetsons. Whether upon a canvas, or spread across seven stories of an inner-city building, Scharf’s compositions feel unquestionably friendly, and often offer greater complexity of message than first meets the eye. This makes perfect sense when set against Scharf’s motivating principles, which include an immense passion for the protection of the environment, observation of the duality of modern society, and a desire to make art accessible to the masses.

Moving from two dimensions to three, Scharf’s sculptural work often includes salvaged plastic – drawing once more upon his will to protect nature – and even large objects such as household appliances. Some of his iconic blob-like characters have been rendered multidimensional, while sometimes the very spaces that Scharf inhabits have become art in their own right. This was the case within the 1981 Cosmic Closet, within Scharf and Harring’s apartment – a party space that would later be reassembled in various locations, finally arriving at the Whitney Museum. Following in that theme, a series of 40 (and counting) Cosmic Caverns have been brought to life over the course of Scharf’s career. Visitors enjoy immersion within a variety of psychedelic spaces, frequently brought to life by black-light.

Collaborations And Treats For Collectors

Scharf’s iconic imaginings have drawn many a collaboration project – ranging from cover art for the B-52s’ 1986 album, Bouncing off the Satellites, to the 2014 Jeremy Scott x Kenny Scharf apparel collection for Adidas. In 2002, he also moved into animation, creating a pilot for The Groovenians, as aired on Adult Swim. In 2018, Scharf became part of The Peanuts Global Artist Collective, a global initiative through which the “beloved Peanuts characters have been brought to life in new and exciting ways for the public to experience, giving the gift of art to everyone.” Scharf’s contributions to the project have included a boldly colored Charlie Brown sculpture, and a highly sought-after skateboard deck. Other notable decks for those who simply can’t resist such a find can be found in his 2011 Color Bubble deck, and the 2014 Kenny Scharf x The Hundreds collab deck.