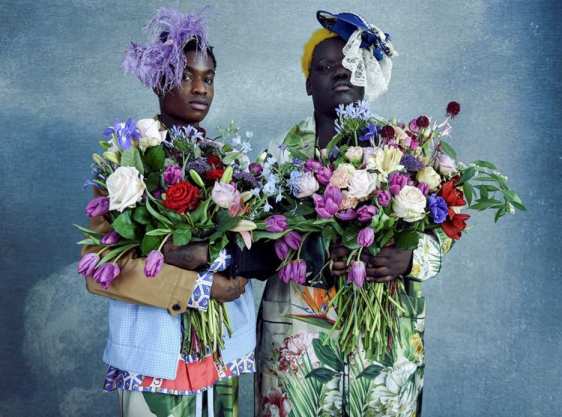 Staged for the first time at Christie’s Avenue Matignon headquarters in Paris, 1-54 Contemporary African Art Fair opened its doors on 20 January to a city placed under strict curfew from 6pm to 6am as France continues to fight Covid-19 and its new variants. 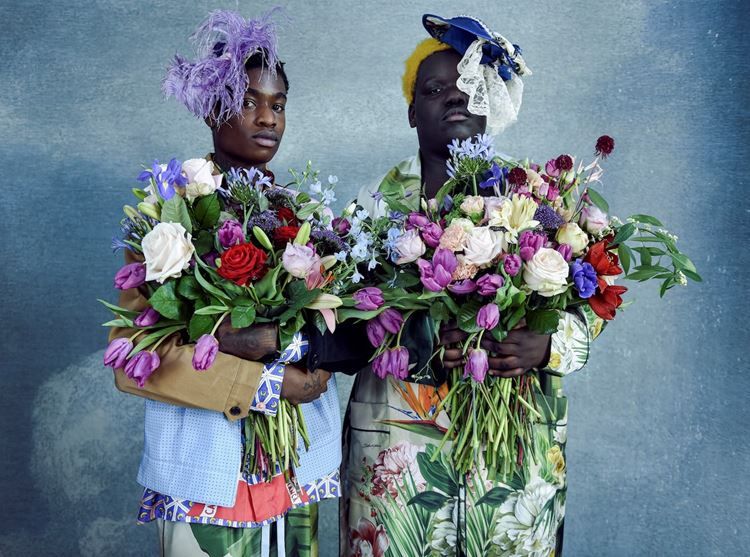 Referred to as a ‘one-off’ edition, the fair ran until 23 January at Christie’s and until 30 January online, displaying 20 international galleries from 15 countries showcasing works by over 70 artists from the African continent and its diaspora. 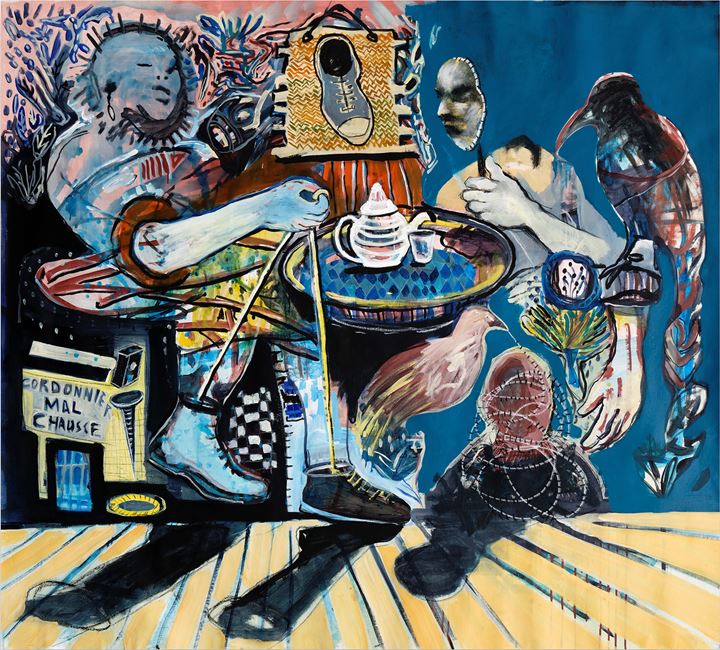 As France now faces a possible third national lockdown, 1-54 proved once again to be a trailblazer in how to keep going amidst continued cancellations and postponements. Yet it too has had to deal with changes. 1-54’s Marrakech edition, initially scheduled to take place at the high-end La Mamounia hotel in February, has also been postponed. On 1-54’s response to current conditions, fair founder Touria El-Glaoui said: ‘As with planning any in-person event in these circumstances, we were at risk of cancellation due to changing and unpredictable regulations. Planning for multiple scenarios was key so that we could adapt to any changes swiftly and effectively.’ 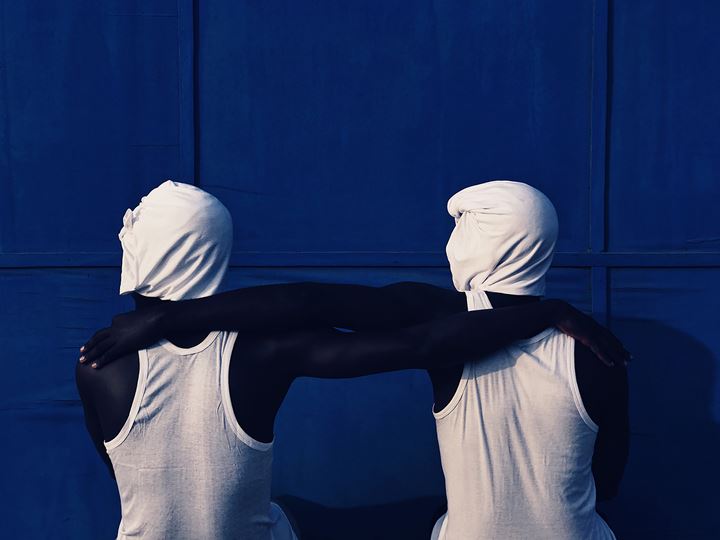 Over the course of four days, the fair reported 1,750 visitors to the physical showing at Christie’s—the maximum it could accommodate based on the capacity per hour slots. Among these were established collectors such as Gervanne Leridon and Henri Seydoux, as well as representatives from a number of institutions such as Caroline Bourgeois from the Fondation Pinault and Hervé Mikaeloff from LVMH, amongst others. 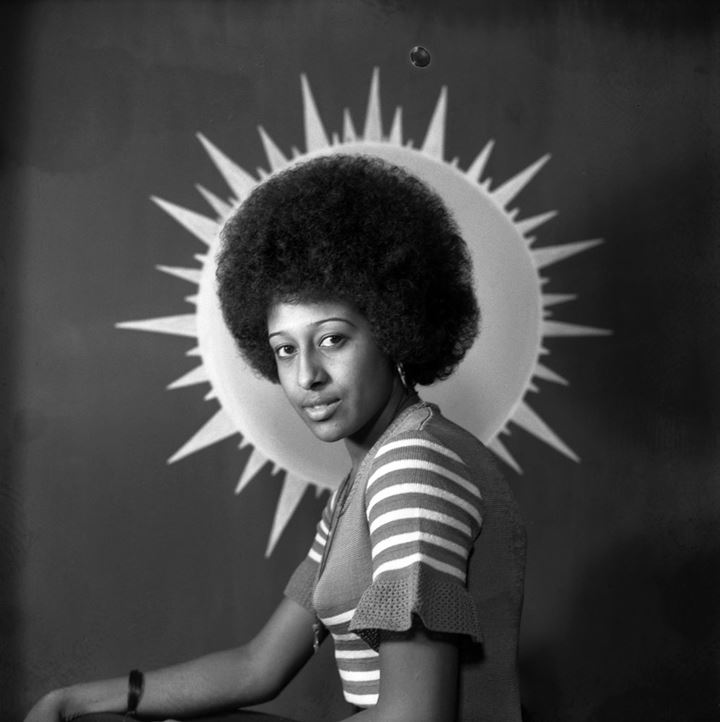 The scene recalled the opening to the 6th edition of Asia Now in Paris at the end of October 2020. The city was also under curfew, albeit a slightly lighter one, but this didn’t stop the art crowd from visiting the fair’s 34 galleries and 13 platforms, highlighting works from Taiwan, China, Korea, Japan, India, and elsewhere in Asia and France, by the likes of Perrotin and Almine Rech, among others. Like 1-54, Asia Now also had a strong online platform, in partnership with Ocula, proving the need to adapt to the ever-changing present through hybrid fairs, with the city of Paris leading the way.

The majority of gallerists at 1-54 indicated that a large portion of sales last week were made online.

As the international art fair calendar continues to be defined by the uncertainty propelled by the coronavirus pandemic, Asia Now and 1-54 appear to have found a way to balance the need for a strong digital presence with a pared-down in-person fair. Cristiano Mangovo, Murmurantes / The Murmurers (2019). Courtesy This Is Not a White Cube.

1-54’s Paris edition extended its partnership with Christie’s, also its partner for its London event at Somerset House in 2020, with the auction house hosting 1-54 on its website, providing access to its 300,000 subscribers.

The majority of gallerists at 1-54 indicated that a large portion of sales last week were made online. ‘In the end we were not there in-person, but we had strong online sales,’ said Linda Pyke, director of THK Gallery. THK Gallery sold two large Lerato Motaung paintings to a foundation and another work by the artist to a private collection in Paris. 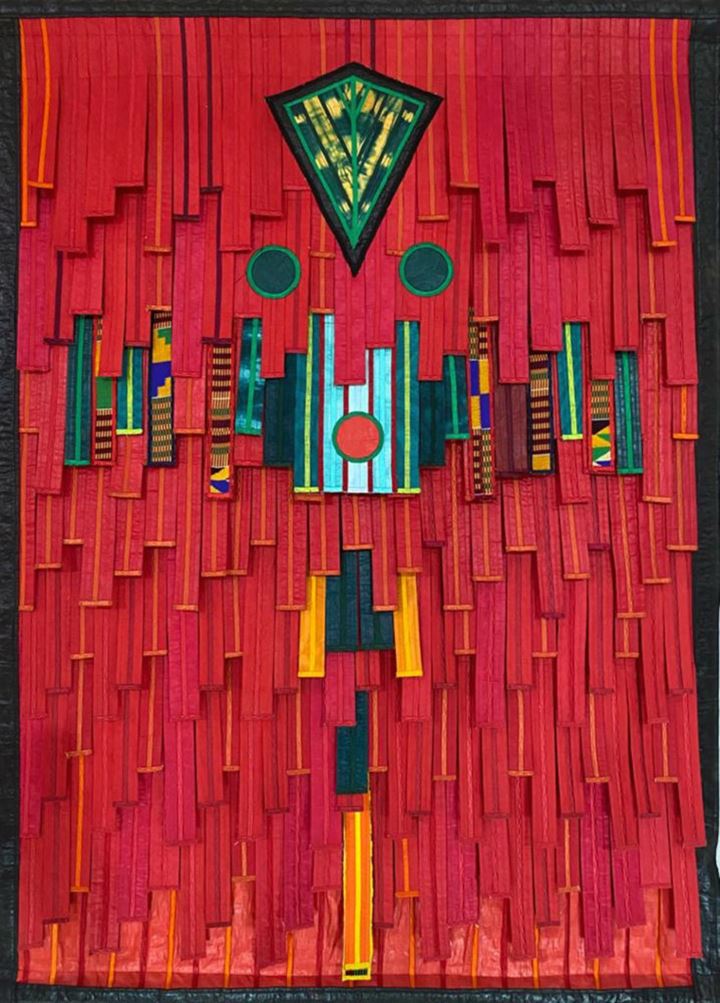 Gallery 1957, which has been successfully running its Accra gallery since 2016 and opened another branch in 2020 in London, sold several works by Ivorian artist Joana Choumali in the range of £10,000 to French collectors at the fair and a few paintings by Ghanaian artist Serge Attukwei Clottey for around £28,000 once the online fair started. ‘The fair went very well,’ said founder Marwan Zakhem. ‘Touria and the team never cease to amaze.’ 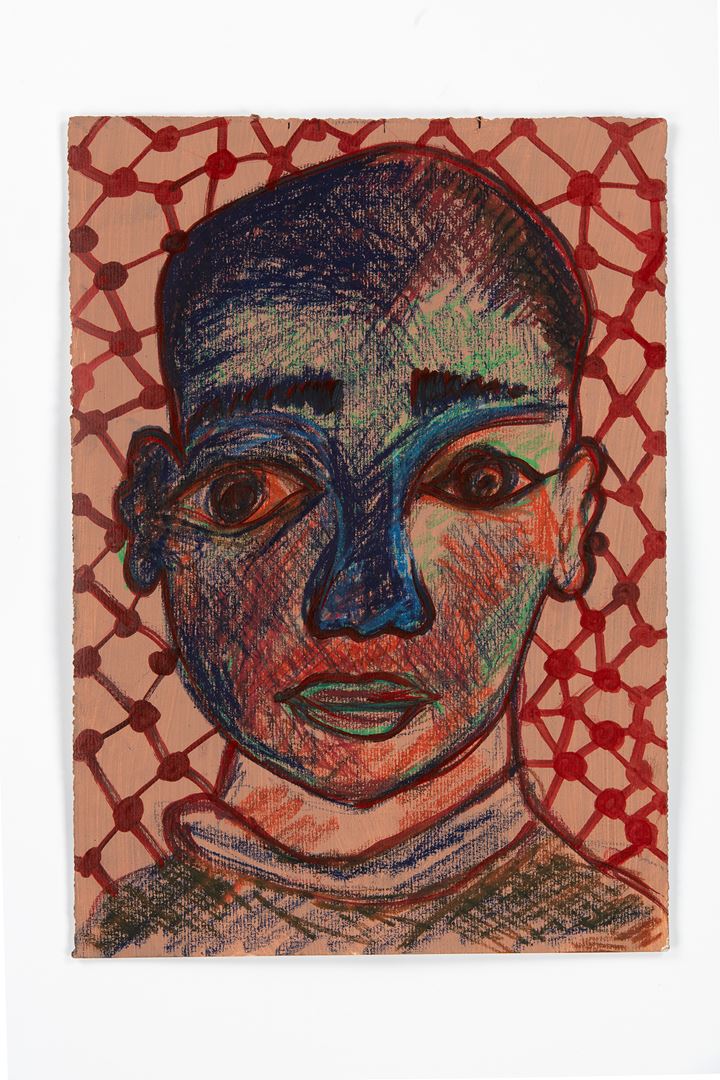 ‘In these difficult times,’ said Julien Pradels, the managing director of Christie’s France in a statement, ‘it’s wonderful to see the strong appetite from clients to enjoy art and experience live exhibitions, not undermining the intense digital activity on our online platform from clients who could not come in person.’ Loft Art Gallery from Casablanca, who exhibited three artists from Morocco—Mous Lamrabat, M’hammed Kilito, and Joana Choumali—sold works both within the physical space and online in the range of €2,800 to €14,000, with interest in Choumali’s embroidered photographs increased through a video produced about her work. 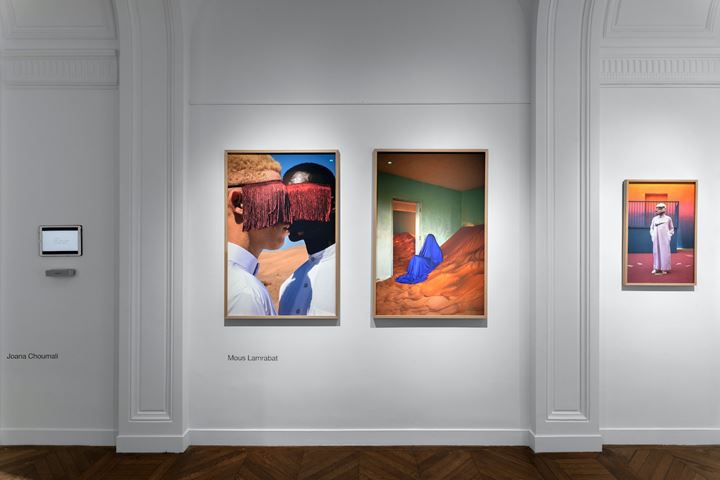 ‘Mous Lamrabat and M’hammed Kilito both offer a rich and diverse image of contemporary Morocco,’ said the gallery’s co-founder Yasmine Berrada. ‘Their photographic universes, which are quite distinct, are born from the distance they have with their cultural heritage and come together in the celebration of Moroccan identity through its culture.’ 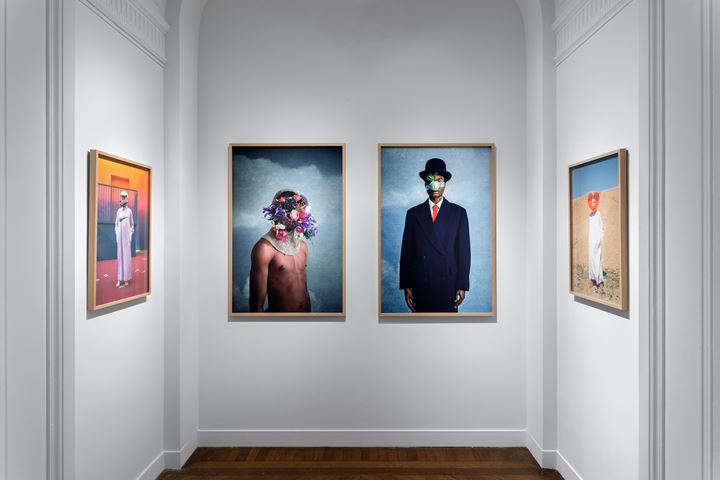 Lamrabat has recently gained success in the fashion world through his edgy portrayals of African and Moroccan references fused with references to Western pop culture.

While Berrada was not present in Paris, she had two representatives man the booth. ‘The gallery had to manage the stand remotely, which is a new experience for us,’ she added. ‘But we did well, selling both online and in-person. We are adapting to participating in art fairs through these measures.’ 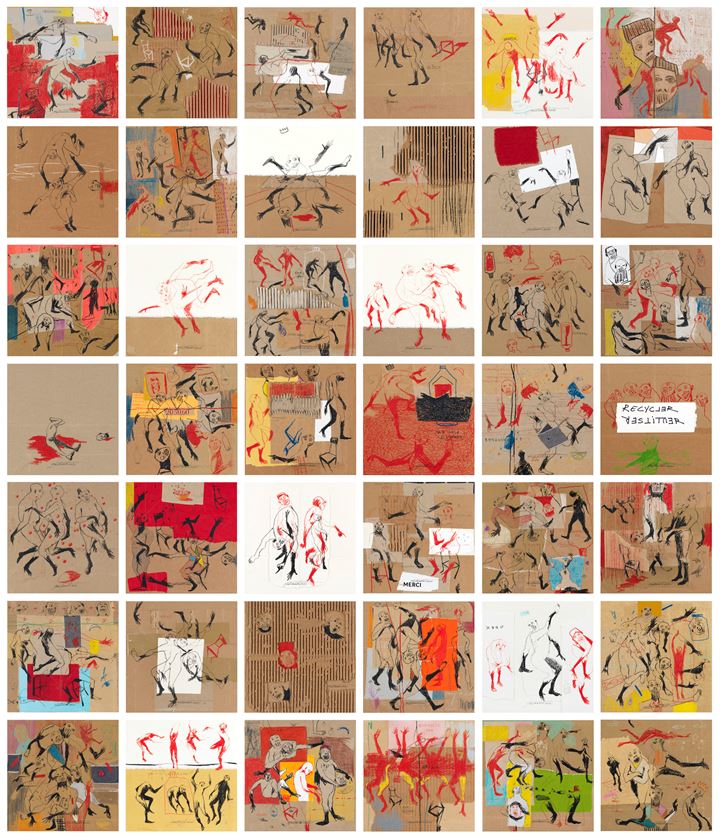 Galerie Nathalie Obadia reported several sales between €8,000 and €10,000 of works by Nú Barreto, originally from Guinea-Bissau and now based in Paris, known for his mixed media works reflective of African cultural references and symbolism drawing attention to social and political issues on the African continent. Like its past editions, 1-54 scored several groundbreaking moments for African artists from the continent. As soon as the fair opened, 31 PROJECT sold six paintings by young Zimbabwean painter Epheas Maposa for a total of €45,000.

Showing his work at 1-54 Paris constituted the artist’s first solo exhibition in Europe. His canvases, abstract expressionist in style, draw on European and African painting styles, bringing to life scenes that draw from his imagination and everyday African life. With such positive feedback, time will tell if another 1-54 Paris is in the cards. It seems possible.

‘This special edition was successful, and our galleries and partners have told us that they would be motivated for editions in Paris in the future,’ added El Glaoui. ‘However, we have only just crossed the finish line for this fair, so we have yet to think deeply about another edition in this wonderful city.’—[O]