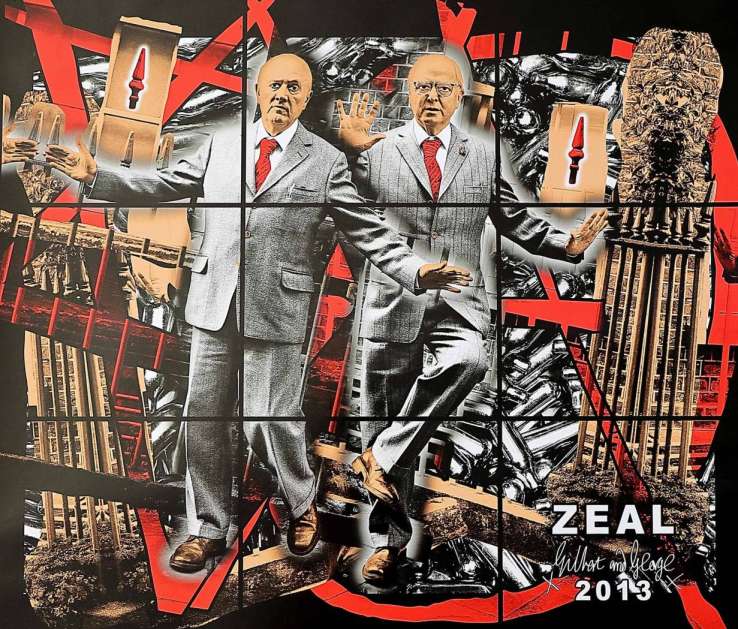 06 Jan Delving Into The Contrary Communion Of Gilbert and George

If you raise the topic of artistic duo Gilbert and George in conversation, you’ll discover that responses of those familiar with the creative pair tend to fall into one of two camps – and these tend to be pitched far, far apart. Much like their condiment comrade among UK rooted national treasures, Marmite, a love or hate scenario is far more likely than ambivalence. Why is this? It would seem that Gilbert and George deal in juxtaposition, and the collision of opposites. Their phenomenal commitment to not only the creation of, but the act of art itself has elevated them to the status of creative royalty. In order to untangle the adoration and controversy that surrounds the pair, it is vital to begin with their knack for engaging opposing forces.

A Melding Of Minds

When visiting the official Gilbert and George website, the first thing you are likely to stumble upon is a quote from the pair in 2014: “We want our art to: bring out the Bigot from inside the Liberal and conversely bring out the Liberal from inside the Bigot”. It is easy to imagine that a duo with such a distinct artistic vision would have emerged from the same background, but this is not the case. In fact, despite the British motifs ever-present within their work, only George Passmore was born in the UK. Raised by a single mother in Plymouth, Passmore studied at the Dartington College of Arts and the Oxford School of Art, before destiny would cross his path with Gilbert’s.

Meanwhile, Gilbert Prousch was born in northern Italy, in the Ladin-speaking South Tyrol province. Equally artistically minded, Prousch studied at the Sëlva School of Art in Val Gardena, the Hallein School of Art in Austria, and then the Akademie der Kunst in Munich, before finally moving to the UK. Here, finally geographically united, Gilbert and George met for the first time in 1967. The pair were studying sculpture at Saint Martin’s School of Art, and as they told the Telegraph newspaper, “it was love at first sight”. From that moment on, the two were inseparable, and quickly they set about constructing their amalgamate artistic persona. Gilbert and George have lived together in East London since 1968, within a fully restored 18th-century house, that is notoriously filled with a trove of collected objects. Speaking of their permanent home, George stated: “”Nothing happens in the world that doesn’t happen in the East End.” The pair married in 2008.

Art Of Union And Polarity

Perhaps the most instantly recognizable of Gilbert and George’s works are their The Pictures series. Iconic large-scale compositions formed of layered photographs; at first in black and white, and then overlaid with primary colors. However, the creative partners work in a broad variety of media and, fundamentally, consider themselves as art – as living sculptures. The most striking contradiction for those first encountering their work is the contrast between their clipped and immaculate presentation – the duo are rarely seen apart, and always appear in suits – and their frequently provocative choice of material. Often employing offensive language, nudity, bodily functions, and controversial topics within their creations, their formal mannerisms and styling leave viewers feeling off-kilter. In fact, so polished are the pair that they were voted as among the fifty best-dressed over-50s by The Guardian newspaper in 2013.

Alongside sizeable photographic compositions, Gilbert and George frequently foray into painting, drawing, sculpture, and performance art. They first gained international attention in live performance for their 1969 The Singing Sculpture, which saw the pair, adorned with metalic face paint, dance and sing to 1932 song Underneath The Arches for hours at a time in front of a gallery audience. The The Pictures series was followed by the Jack Freak Pictures series, which followed the visual format of their predecessors – with often mirrored motifs, under-laying a black grid. The pair feature prominently in their visual works, in the mix alongside sometimes disturbing imagery, and particularly in their more recent creations, the Union Jack flag.

Perhaps the best way to find a comfortable space when exploring the world of Gilbert and George is to take their every act in the context of polarity. Speaking to Tatler magazine, George illuminated: “We don’t want to be weird because all of the artists think they’re weird, and we don’t want to be normal because everyone is normal, so we felt it’s better to be weird and normal at the same time.” In a world that increasingly pressures us to define ourselves and choose a side on every issue, perhaps a heady dose of Gilbert and George is exactly what’s needed.