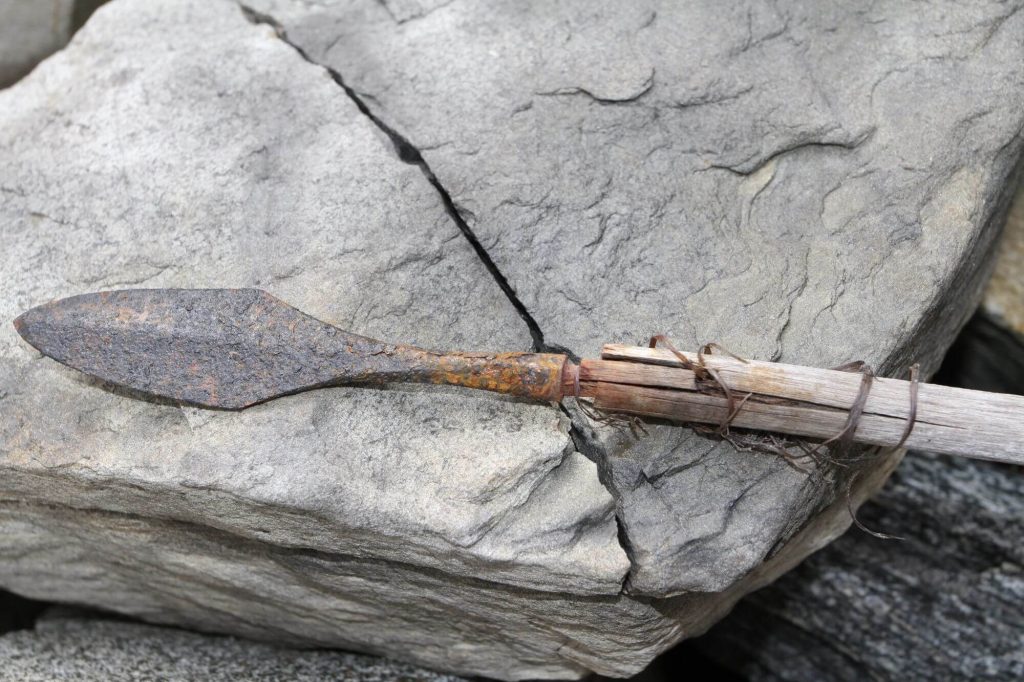 Global warming has unlocked hundreds of Viking artifacts from the ice of the Norwegian mountains in recent years.

In November, archaeologists from the Secret of the Ice project, part of Norway’s Glacier Archaeology Program, discovered 68 arrows spanning a period of 6,000 years—a record for any frozen archaeological site—on the Langfonne ice patch, an ancient Viking hunting ground.

A few months earlier, scientists announced discoveries that had been frozen in the rapidly melting Lendbreen ice patch, which was once part of a Viking trade route.

Ice patches tend to preserve artifacts frozen inside them, but they grow and shrink with the seasons, allowing melt water to displace objects from where they were originally lost.

“We get angry reactions to our finds from climate science deniers all the time,” Lars Pilø, the lead archaeologist on the Secret of the Ice project, told Artnet News. “The whole idea that one can disprove the climate science behind global warming with archaeological finds shows a stunning level of ignorance.”

A 1,300-year-old arrow from the peak period of hunting at the Langfonne ice patch. Photo courtesy of Secrets of the Ice.

The newest arrows were the best preserved, while the oldest arrows had been displaced due to seasonal melting over the millennia and were heavily damaged from exposure to the elements.

The ice patch, which first formed around 5,600 BC, currently measures just 30 percent of the area it covered 30 years ago, and 10 percent of its size during the Little Ice Age that ended in the mid 1800s. As melting accelerates, archaeologists are in a race against time to recover artifacts as they are freed from the ice, before they dry out and rapidly begin to deteriorate.

We spoke to Pilø about some of the most interesting artifacts recovered from the ice in recent years, how Vikings used the items, and what they tell us about the mountain pass and the people who traveled over it. 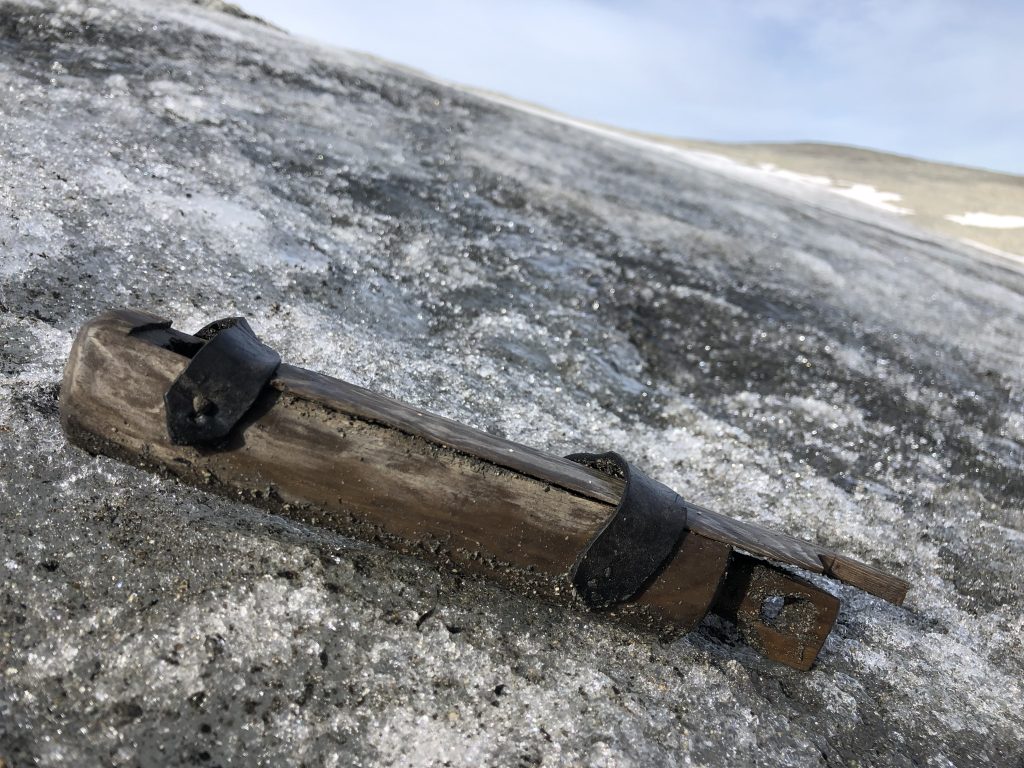 A tinderbox found in the Lendbreen pass. Photo by Espen Finstad, courtesy of Secrets of the Ice.

“The tinderbox contained a wooden stick and small bits of resin-filled wood. It is not dated or analyzed yet. It is probably an accidental loss, since it is complete. We think that it is likely to date to the Viking Age or the Medieval Period (500 to 1000 years old), but it could also be younger—or older.” 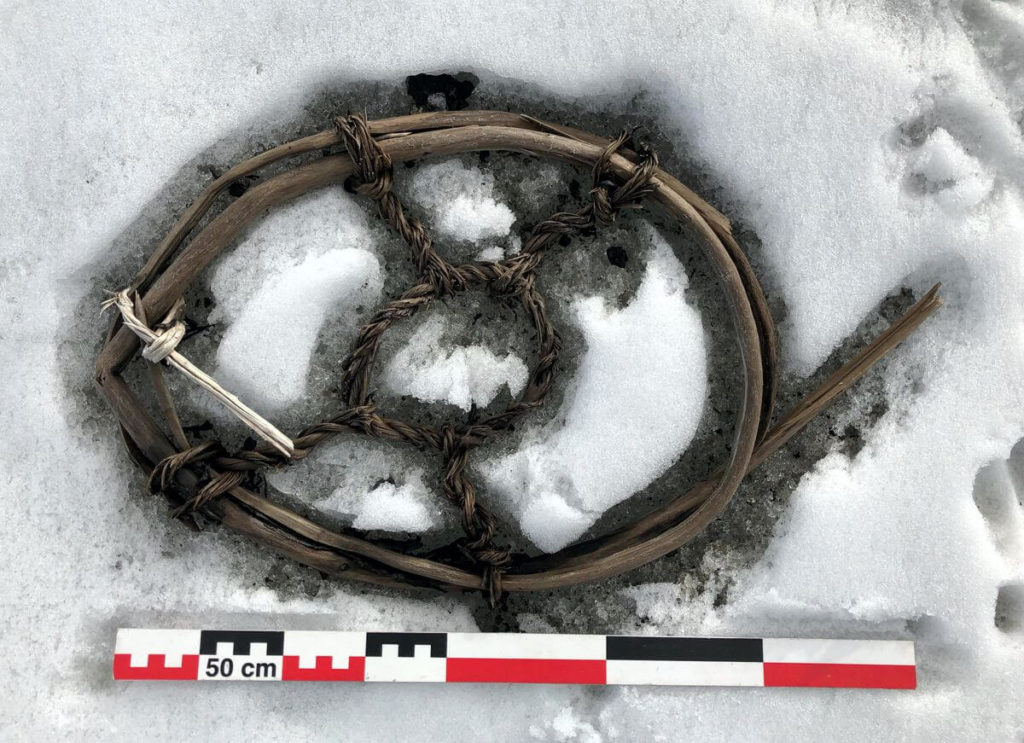 The horse snowshoe found in the Lendbreen pass. Photo by Espen Finstad, courtesy of Secrets of the Ice.

“Horse snowshoes are known from historical sources. However, to our knowledge, this is the first horse snowshoe found on an archaeological site. We have two more such snowshoes from Lendbreen that are less well preserved. The snowshoe was used when the snow was either powdery or rotten, so winter or spring/early summer. They are not necessary when the snow is firm. Losing one of them would make crossing the snow more difficult, depending on the snow conditions.” 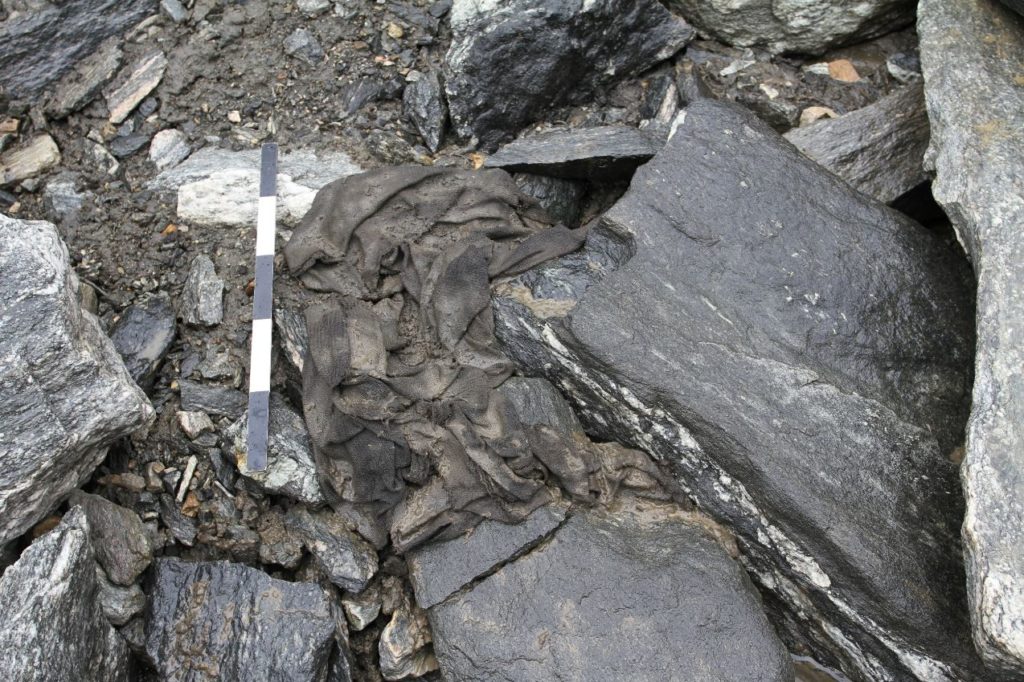 The Lendbreen tunic, which dates to the year 300, is the oldest piece of clothing ever found in Norway. Photo courtesy of Secrets of the Ice.

“The tunic is made from wool, which was spun and woven. It survived because it has been inside the ice for most of time since it was lost. Clothing is also known from glaciated mountain passes in the Alps. One reason they were left there could be hypothermia. When people are freezing to death, they become very warm in the final stage, which can lead to undressing—a paradoxical behavior.” 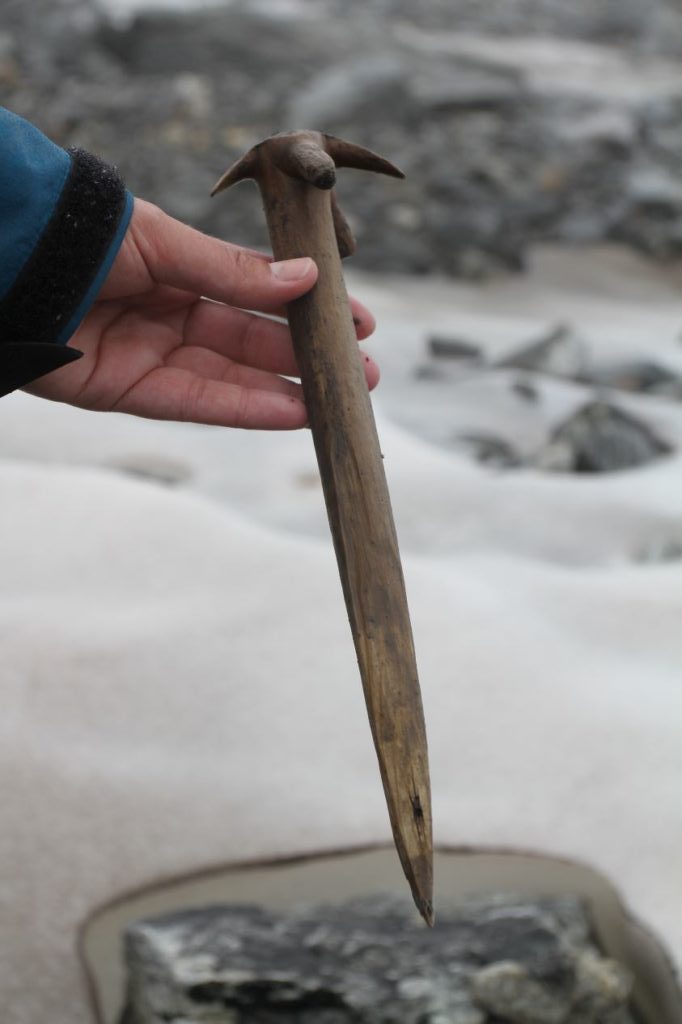 A wooden whisk, radiocarbon-dated to the 11th century AD found in the Lendbreen pass. It was perhaps secondarily used as a tent peg, as such whisks were rarely pointed. Photo courtesy of Secrets of the Ice.

“The whisk is a kitchen utensil used for stirring [foods like] porridge. It is probably an accidental loss on the route between the main farm and the summer farm. Such whisks are still made today, but they are usually not pointed, so this artifact may have been used secondarily for another purpose, perhaps as a tent peg.” 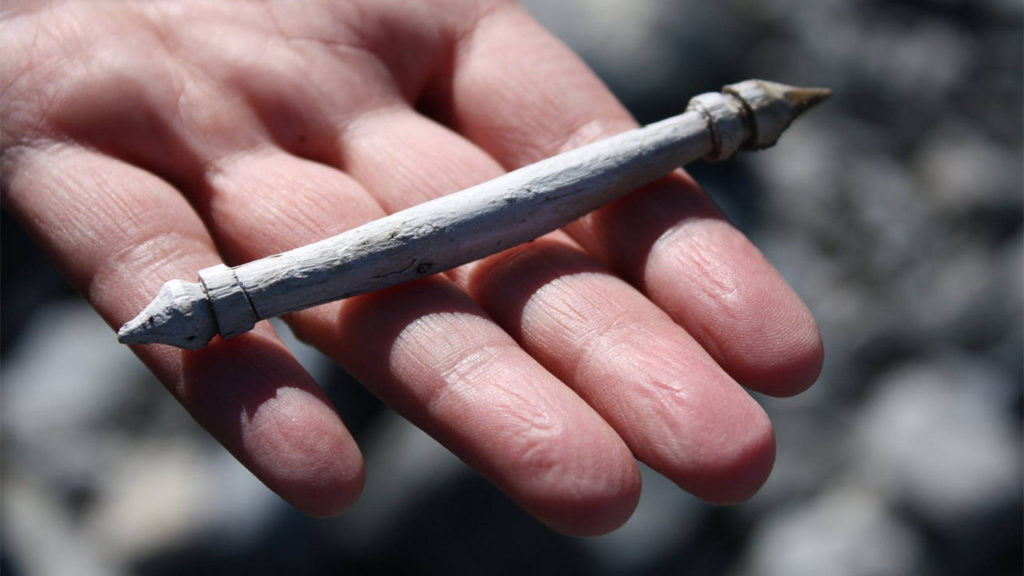 A wooden bit for a goat kid or lamb, radiocarbon-dated to the 11th century AD, found in the Lendbreen pass. Photo courtesy of Secrets of the Ice.

“It is a bit for young animals, mainly goat kids and lambs, to stop them from getting milk from their mothers. Identified by local elders, who used such bits (in juniper) until the 1930s. Ours is also in juniper, but radiocarbon-dated to the 11th century AD. It is a testimony to farm animals having used the Lendbreen pass” 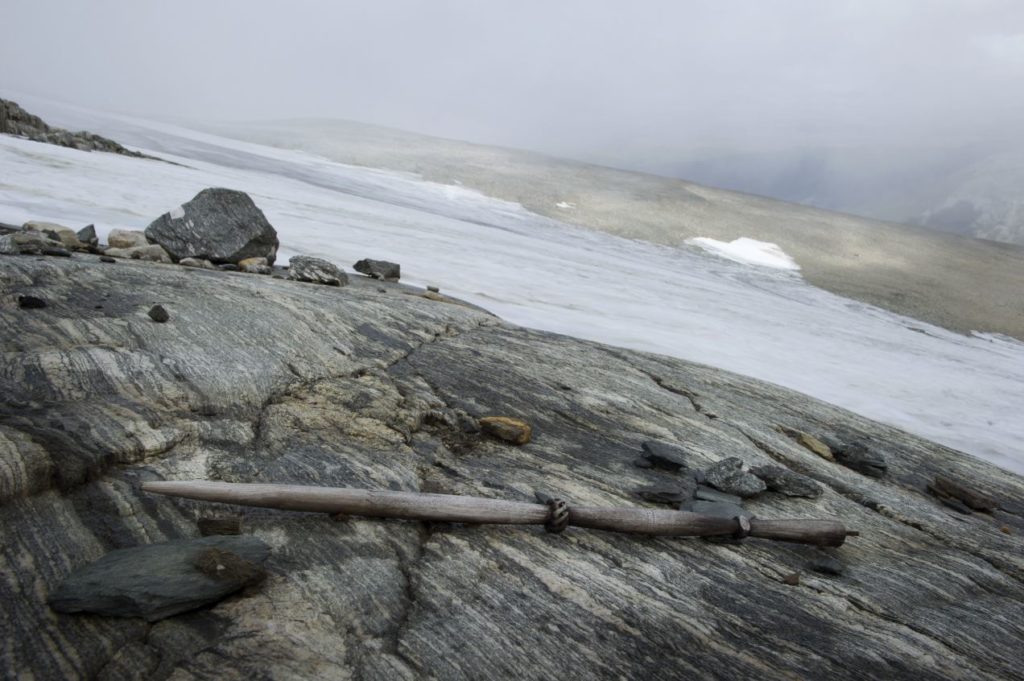 A distaff found in the Lendbreen pass. Photo by Espen Finstad, courtesy of Secrets of the Ice.

“This distaff is made from birch and is 1200 years old. It’s from the pass area at Lendbreen. A similar distaff has been found in the Oseberg Viking ship burial. Distaffs are tools used to hold the wool while it is being spun. Perhaps someone was spinning wool while walking the long route between the farm and the summer farm? Or it could have been an accidental loss.”